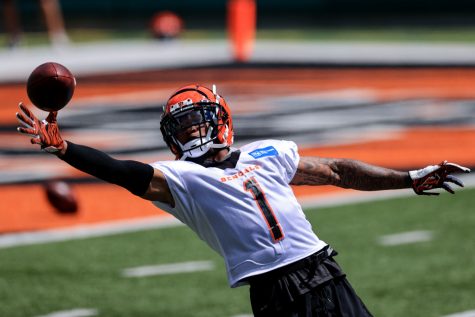 Being the highest touted prospect at your position can be tough, but Bengals rookie Ja’Marr Chase isn’t a stranger to tough situations. After having a historical sophomore season for LSU capped off with a national championship win in the 2019-2020 football season, he decided to forgo his remaining eligibility coming into his junior year and begin to prepare for the 2021 NFL draft following the Covid-19 Pandemic.

After missing over a year and a half of contact football, Ja’Marr still put on a show at his LSU pro-day, running a blistering 4.38, ranking the 11th best in the draft. He came into the draft ranked number one at the wide receiver position and was taken at just that. With the 5th pick in the 2021 NFL draft the Cincinnati Bengals selected the 6’1 200lb wideout from Harvey, Louisiana.

However, with the NFL preseason coming to a close Ja’marr is already coming under fire for his performance having dropped 4 out of his 5 targets over the course of two games. Many are ripping at this young potential star already claiming him to be a bust and people all over twitter are running with it. One tweet jokingly stated that “Ja’Marr Chase and Donda both dropped on the same day.” After a lackluster showing in the preseason it is on Ja’Marr to prove the doubters wrong. The only question is can he find his way back to the dominant, gritty player every fan loved to watch?