Midnight Mass Review: A Scattered, Albeit Enjoyable, Mess of a Show

While the acting is great and emotions run high, narrative and thematic inconsistencies make for a middling show. (Warning, major spoilers for Midnight Mass near the end of the article below.) 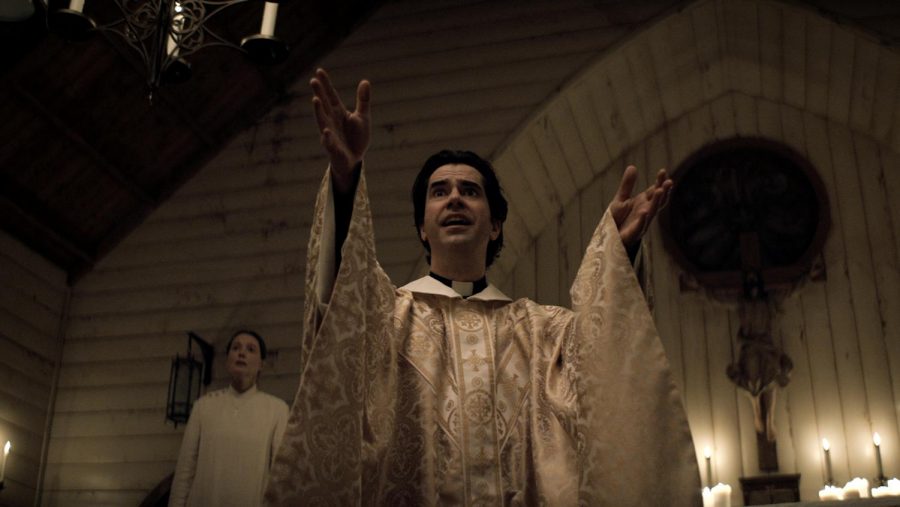 Mike Flanagan has been on quite the winning streak the past few years. After writing and directing two successful horror films for Netlfix, Hush and Gerald’s Game, along with two smash-hit limited horror series, The Haunting of Hill House and The Haunting of Bly Manor, Flanagan returned on September 24th with his newest show, Midnight Mass. While both of his films were mildly successful, it was his limited series that really turned some heads. The Haunting of Hill House seemingly caught lightning in a bottle, becoming a surprise hit, and received incredibly positive reception from both critics and fans alike. And while 2020’s The Haunting of Bly Manor had similar commercial success, it was met with a much more lukewarm reception than the 2018 limited series. This led many to wonder if Flanagan could capture the same success he found with Hill House or if it was simply a one-time thing. So does Midnight Mass reach the same heights as The Haunting of Hill House or does it hit the same lows as Bly Manor? Well, in this writer’s opinion, it’s a mix of both.

Before I get into any of my critiques of this show, I would like to highlight what it does well. Although I think the series is a bit of a mess, I did indeed like it. Similar to Flanagan’s other works, the show is filled to the brim with emotion, as several characters give long introspective monologues, along with many tear-jerking deaths (sorry, mild spoiler) that occur as well. However, one element of this show that is done much better than in Flanagan’s other series is the ending. It’s much more cathartic and satisfying than in both Hill House and Bly Manor. The end is bound to make you shed a tear, if not openly sob. The true standout element of this show, however, is Hamish Linklater’s performance as Fr. Paul Hill. This is one of the greatest performances I’ve seen on television in years. Even when the show lulled in some areas, Linklater’s character kept me engaged, simply because of his breathtaking performance. Whether it be the moving, goosebump-inducing homilies given by his character, or through the nuanced interactions between him and the people of Crockett, the town the show is set in,  Linlater’s performance is captivating through and through.

However, all of the components that I liked only masked the show’s many flaws. Hamish Linklater’s great performance and the emotional conclusion of the series help make the viewer forget the show’s jumbled themes and narrative inconsistencies. A few months before Midnight Mass came out, Flanagan stated in an interview with Entertainment Weekly that the show was “by far the most personal thing I’ve ever been lucky enough to work on.” Flanagan, who was raised as a Catholic but then converted to atheism, has very complex feelings about religion, and that’s a heavy theme throughout the show – sometimes to its detriment. In that same interview, Flanagan explained “What made it exciting, and kind of scary and uncomfortable sometimes, was that I really wanted to make sure that I was playing both sides of the board as passionately as I could.” Flanagan’s philosophy to “play both sides of the board” actually hurts the series more than it helps the series. The problem with religion is that there really aren’t two sides – it’s multi-faceted, and the show struggles to come to terms with that. Throughout the series, Flanagan addresses atheism, Islamophobia, and several critiques of Catholicism. Hamish Linklater’s character shows how ‘undying faith’ can be harmful, while Samantha Sloyan’s character, religious zealot Bev Keene, shows how people manipulate religious texts (i.e, the Bible) as an excuse to act hatefully towards others.

The problem with having so many religious themes in a seven-episode series is this: none of those themes are fully fleshed out, and they even start conflicting as the show ends. Ironically Flanagan, who is an atheist, ends the show in a way that favors participating in a religious community over atheism, which is a notoriously independent religion. Nearly all of the characters die in the end (again, sorry for spoilers), singing a religious hymn together as they go, finding comfort in dying with each other, expressing their faith. This ending scene is where the narrative weaknesses of the series show the most. All of the major characters meeting pretty brutal deaths is certainly a very emotional end to the show, but only a handful of the characters actually get to fulfill the end of their respective arcs, and the rest are unresolved. While I felt very satisfied with the show’s ending when the credits rolled, I couldn’t help but feel like there were parts missing, and that’s when I started to think about the series’ faults. It’s very enjoyable to watch, and there’s some great acting and some well-written scenes, but when I pulled back the curtain, I realized that this show lacks a consistent religious theme and interesting characters. Overall, I give it a 6.5/10.