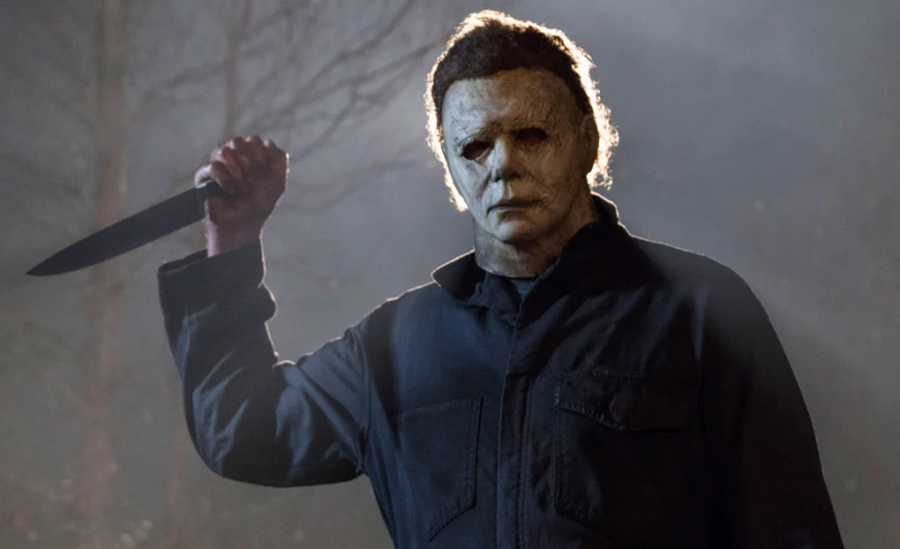 Michael Myers getting ready to strike for a kill.

Michael Myers starred as the man behind the white mask yet again in the 2018 film “Halloween.” In 2021’s “Halloween Kills,” the latest movie in the Halloween franchise, Michael Myers is back on the big screen. After seemingly putting an end to Myers, the film leaves off where the previous movie ends and follows the town of Haddonfield and its citizens as Michael Meyers continues to terrorize everything and everyone he can get his hands on.

Laurie Strode, the main character played by Jamie Lee Curtis, is essentially sidelined in this movie, as she is recovering from her injuries obtained by Meyers throughout the entirety of the 2018 film. She does, however, help inspire many of the citizens to come together and hunt down Michael Meyers, hoping to end his reign of terror once and for all. As many avid horror movie critics and “Halloween” fans would know, though, Michael Meyers does not get defeated easily. Some people might argue that he is downright un-killable and something other than human due to his ability to withstand severe injuries and defy death.

Now, regardless of what people might say about the quality of this film, this movie is undeniably a simple gory slasher movie. While the 2018 “Halloween” focused more on a structured plot and its connection to the original “Halloween,” “Halloween Kills” focuses more on proving how powerful Meyers really is by having him kill as many people as possible. In fact, this movie had the most on-screen deaths of any “Halloween” movie in the franchise, with at least 34 kills.

If you are a horror fan who loves gore, killings, and a classic Halloween icon, this movie will be right up your alley. But if you are a fan of horror movies that focus more on plot and characters, actually have substance, and make you think, then you probably won’t find too much enjoyment from this movie. Personally, I thought the film was pretty enjoyable and did its job as a scary, gory, Halloween movie. However, I would have liked a bit more creativity and substance put into the story. If I had to rate the movie out of 5 stars, I would probably give it a 3.5 or 3.75 out of 5. At the end of the day, “Halloween Kills” is simply a fun, thrilling, and scary movie that may get repetitive and mind-numbing at times, but leaves the viewer excited for the third installment, as “Halloween Ends,” which is dubbed as the “final Halloween film” (we’ll see if that holds true or if we get yet ANOTHER reboot) is confirmed to be dropping next Halloween.