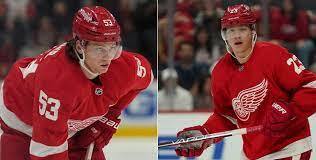 Being a Detroit sports fan is frustrating. Sometimes it seems like only one of our teams can be good at a time (or often none at all). However, the Red Wings have taken the role of being arguably the best sports team in Detroit all thanks to General Manager Steve Yzerman.

It all started in April 2019 when the former GM of the Tampa Bay Lightning came back to his old stomping grounds. Upon hearing the news, Red Wings fans everywhere knew what was in store for the team. Yzerman had built a dynasty in the Lightning organization and people expected the same result in Detroit. It seems like people are finally seeing what he’s been crafting over these past few years, but that didn’t come without confusion and suspicion.

It first started in the 2019 when the Red Wings (yet again screwed out of a top 4  draft pick) drafted Moritz Seider 6th overall from a professional team in Germany. Many, including myself, were confused on why the team passed up on elite prospects like Trevor Zegras and Cole Caufield. However, Yzerman envisioned a future for the Red Wings that no one else could predict. In the 2020 NHL Draft, the Red Wings selected Lucas Raymond 4th overall from a professional team in Sweden. Though neither Seider nor Raymond played in the 2020-21 season, hype seemed to build around the team regarding their young prospects.

This season is Seider and Raymond’s first season in the NHL, and so far, they haven’t disappointed. Ken Holland, former Red Wings GM, said that “Seider and Raymond have created a lot of optimism” (Detroit Free Press). The two are among some of the favorites to win the Calder Trophy (Rookie of the Year) just over a month into the season. Yzerman is just beginning to turn the heads of Detroit sports fans this year and will continue to prove to Detroiters just how menacing the Red Wings organization will be moving forward.