Radical On and Off The Court

The headlines regarding Kyrie Irving are “It Amounts to Betrayal,” “Kyrie Irving is being selfish,” “Kyrie Irving should retire,” and “There ALWAYS something getting in the way of…” All of these headlines used to tear down a man who has decided to use the right to freely express his amended right. The media has taken every necessary step to paint this man out to be a complete monster because he does not want to take part in a vaccine that he is not fully comfortable taking. A man admired for what he can do, but clearly not admired for who he is speaks volumes to the nature of the media; therefore, the Kyrie Irving coverage by the media will go in order to put pressure and exonerate someone’s image. Kyrie Irving is an NBA Champion, multiple-time All-Star, All-Star MVP, Rookie of the Year, but most importantly a black 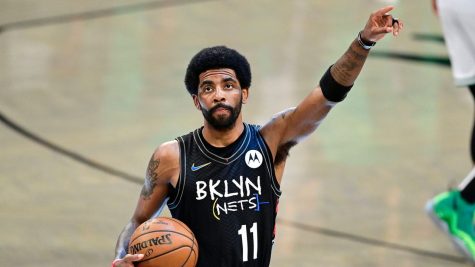 man with a voice who refuses to “Shut Up and Dribble.” Kyrie Irving is a man that should be applauded because regardless of the backlash of his decision he refuses to allow the pressure and negativity to change his mind. He stands firm on the importance of standing up for what you believe in, and doing whatever is necessary to firmly push the importance of what it is that he believes in. What is so unfortunate about Irving’s career is that the moment he decides to make a radical push upon something he believes in it causes all of the support to completely go dark, yet if Irving decided to be vaccinated and play he would be being praised by the Stephen A. Smith’s. Since he is not they use any and every opportunity to show how much of a bad person that Kyrie Irving is.