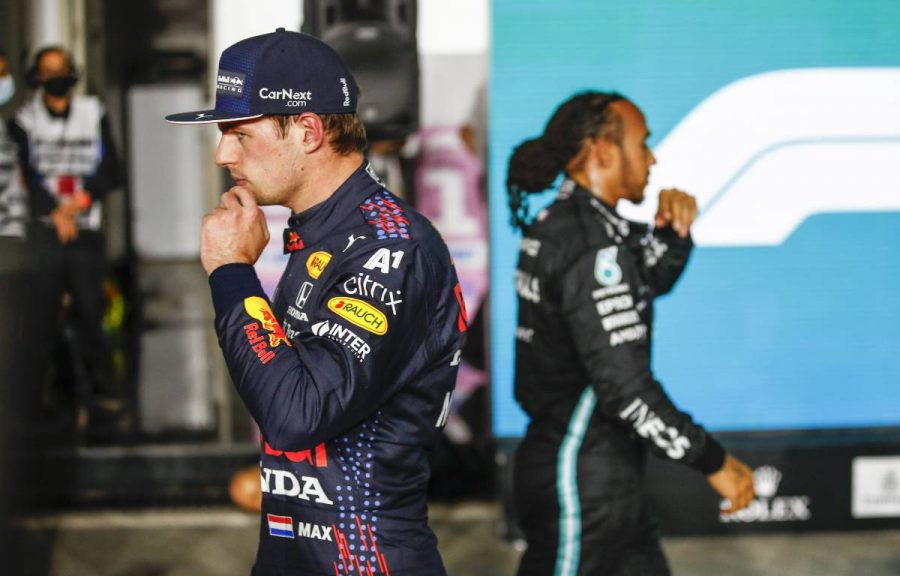 Max Verstappen and Lewis Hamilton pictured pondering their next race.

As the Formula One (F1) season comes to a close, there have been increasing whispers around U of D on who will win the championship – Max Verstappen or Sir Lewis Hamilton? F1 has had an exponential increase in viewership in the US in the past few years, and today I ‘m breaking down that meteoric rise, and some basics of the sport.

Formula One is a cross-continental motorsport series where 20 drivers face off in multiple races around the world. These take place from legendary tracks like Britain’s Silverstone Circuit and Italy’s Monza Track, to the tight and windy streets of Baku (the capital of Azerbaijan) and Singapore. What makes F1 so special is not just the speed, but the pure technological might of these cars. Compared to NASCAR, where teams build around already predominantly built stock cars like the Ford Mustang, these teams build cars, and in some cases engines, from the ground up. They create masterpieces of vehicles, combining aerodynamics, electronics, and power to create cars capable of pulling G-Forces comparable to fighter jets.

A Formula One car can be best described as a single-seat, open-wheel racing vehicle, with front and rear wings, and an engine positioned behind the driver. This creates the possibilities for teams to make cars that can not only go 200 MPH on the straights, but through corners as well. However, not just anyone can control these beasts of machinery. It takes a highly trained and focused individual who can become one with his car – so well, that even slight wear and tear in the tires can be detected. Some sports are said to come down to seconds, but F1 can come down to tenths or even hundredths of a second to determine who is on a faster lap. That measurement may seem insignificant, but once immersed in the sport, you start to realize how much of a gap half a second is. In some cases, half a second could be the difference between starting first or starting midway down the pack. With this level of competition, an extreme level of detail and concentration needs to be taken, with drivers needing to turn, brake, and accelerate in certain areas; sometimes this margin is so small that it can come down to millimeters of your car either clearing a corner to perfection, or you ending up in the wall, ending your race.

F1 has 10 teams, each with two drivers fighting for two separate titles. The drives fight individually for the most points to win the World Driver title, while each team fights for the Constructor’s title, where both driver’s points are combined to see which team has the best overall composition.

But why should you care? Why, if you turn on ESPN and F1 comes up, should you keep watching?

Well, for the first time in five years, there is a competitive title fight. For the past seven years, Mercedes AMG Petronas has won every title, while Sir Lewis Hamilton has six, and Max Verstappen has nine. That aforementioned title fight was between teammates, not even two separate teams. The last time a true title challenge went on between two drivers on separate teams was 2012. Either way, this year history will be made. If Sir Hamilton wins, he will have broken the record for most Drivers Titles won, with eight. And if his rival, Max Verstappen, wins, he will become the first non-Mercedes driver to win since 2013. And on top of that drama, with one race remaining, Lewis and Max are tied on points! This means that at the season finale in Abu Dhabi, the winner will take all, with whoever places first making history!

If any of this was interesting to you, I would recommend you watch the Netflix series Drive to Survive. It shows all the behind-the-scenes of the past three F1 seasons, and gives you a good look into not only how the sport works on a fundamental level, but also introduces you to drivers and teams that you can follow. It’s what got me into the sport, and gave me great insight into something that I still love today. So, overall, Formula One is a sport you can love on any level, whether that be the surface level of liking to watch the races, or going fully in depth and immersing yourself in the sport and all of its technology. I hope this was informational!