Why Amy Coney Barret Should Not Be Confirmed 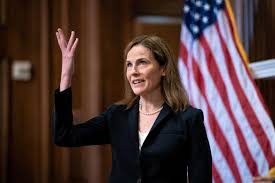 After Justice Ruth Bater Ginsberg’s passing in late September of this year, the President, his staff, and the senate majority made it clear that they wanted to push through confirmation of a new Supreme Court Justice as soon as possible. The President almost immediately nominated Amy Coney Barrett to be confirmed to the Supreme Court, despite it being less than two months before the presidential election. Four years ago, there was a similar situation after the death of Justice Antoin Scalia, but President Obama’s nominee, Merrick Garland, was blocked by the Senate. Now, the same group of Republicans who blocked Judge Garland are trying to do what they promised not to do four years ago.

In early 2016, a couple of hours after the death of Justice Scalia, Senate majority leader Mitch McConnell said without hesitation, “The American people should have a voice in the selection of their next Supreme Court Justice. Therefore, this vacancy should not be filled until we have a new president”, but this year McConnell seems to think the opposite now that the situation is in his favor. He then stated that “The American people should have a voice”, but judging from his actions this year he does not actually believe that. This government is a democracy, not a political playground for McConnell to make up new rules whenever it suits him.

Furthermore, after many members of the Senate and President Trump caught coronavirus at the Supreme Court nomination party, it is not the time to be fighting over this. Congress is still working on a coronavirus relief bill and now at least three members of the Senate have been infected with coronavirus from this maskless party. Our leaders need to fix the problems they were assigned first before creating a new one.

If this nominee gets confirmed before the election to fill the seat, it will only further exacerbate division and claims of corruption in our government. Many Republican officials have turned completely on their word, that if there was a vacancy in the Supreme Court during an election year, they would wait until after the election. The seat in the Court should not be filled according to their own logic. They need to try and fix the problems they have within the senate.. They need to fulfill their duties as leaders and actually listen to the voice of the American people by waiting for the results of the 2020 election.