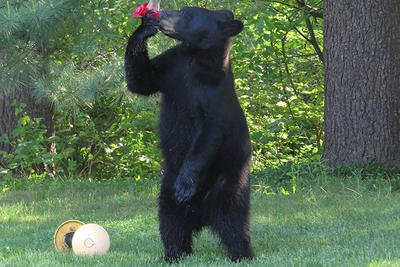 – One of the many black bears Brother B. has faced off against.

Now that Brother Boynton is the new interim principal of U of D, it seems proper to get to know him a little bit better, which is why an interview was held with him that gives a glimpse into his past life, and his future vision as acting principal.

Brother Boynton has lived an extraordinary life. He has traveled all over the globe, helping children in schools in Patna, India, leading a community through the 2010 7.0 magnitude earthquake in Haiti, and teaching prison inmates in Mexico meaningful skilled trades, like carpentry. A skilled linguist, Brother Boynton has learned several languages, such as Spanish, French, Haitian-Creole, and a little bit of Hindi. He has also developed skills in just as many not-so-common instruments, including the fiddle, Irish tin whistle, mandolin, harmonica, and banjo. Although Brother Boynton has had many exhilarating adventures, he started with humble roots in the Upper Peninsula, where he acquired his sincere passion for the outdoors. Brother Boynton enjoys hunting, and since he is part Native American, he can venture onto Indian reservations to hunt year-round. Some of the animals he has harvested include the white-tailed deer, the American black bear, and everyone’s favorite Christmas gift—the partridge.

It may be surprising to hear this, but Brother Boynton’s assignment to U of D is actually his third. He previously stayed at The High from 1996-2002 and 2011-2013. Brother Boynton spent his prior years at U of D working as a teacher in the Theology and Social Studies Departments. His current stay at U of D has had him working in the Development Department,  where he fundraises for the school. However, with the sudden absence of a principal to start this semester off, Brother Boynton stepped up to take the helm. In the interview with Brother Boynton, he talked about the way he wants to lead the school. He said he thinks of himself as the captain of the ship, so he wants to set a positive tone with that position and help everyone feel a sense of belonging. One of the more visible ways Brother Boynton has done this is by having a literal open-door policy, which he hopes will encourage more people to stop by and say hello to him. When asked about his long-term thoughts on being principal, Brother Boynton said he “is open to keeping the job, but if someone applies who is more qualified,” he “would happily work under them.”

To finish off the interview with Brother Boynton, a question was asked about the “Snow Day” policy. Brother Boynton said that since he lives on-campus, he decided to delegate the decision of calling snow days to a group of faculty members who live off-campus. Now students know it is a group of anonymous people who don’t want them to make snowmen and snow angels, not our new interim principal Brother Boynton.

The Cub News would like to thank Brother Boynton for taking the time to have a sit-down interview amidst his busy schedule, and wish him the best with his new position.

(Interview was conducted in March 2021).