Is Michigan Football Back?

Wolverine fans have been suffering at the hands of their football team for several years now. They ended the 2019 season with a mediocre 9-4 record (6-3 in conference play) and declined further in the 2020 season, with a 2-4 record. It is safe to say that in recent years, they have not been playing like the all-time winningest college football team that they truly are. However, at the time of writing this article, the University of Michigan football team is currently 4-0 and ranked number 14 in the country. Could this be the Michigan team that the fans have been so desperately waiting for?

Michigan has had an impressive start to the season, to say the least. They have leaned heavily on their run game, and understandably so, given that they are averaging 290 rushing yards per game, and are number 5 in the nation for this statistic. Their best game to date in terms of rushing yards was against Northern Illinois, with 373 yards, a game where they pinned 63 points on the poor Huskies. However, arguably, the biggest issue with the team right now is their passing game, or lack thereof. Only three teams in the entirety of college football have thrown the ball less than Michigan, and this is going to need to change sooner rather than later if the team is to succeed. 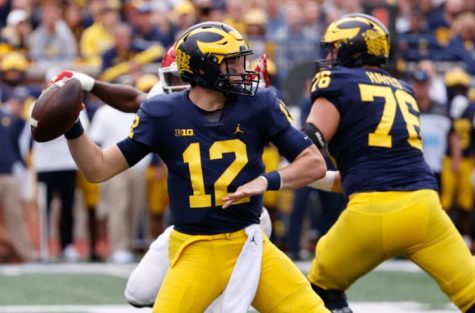 The Wolverines’ lack of confidence in their passing game was exposed in the second half of their game against Rutgers. All it took was a few halftime defensive adjustments by the opposition, aimed at slowing down their run game, and Michigan’s entire offense was essentially shut down. They had only 42 total yards in the entire second half, with 35 rushing and 7 passing on 1/5 attempts. Michigan QB Cade McNamara admitted in a post-game press conference, “They really bailed us out,” referring to the defense. “We have to make sure that we don’t put them in that position again.”

Despite their exceptional start to the season, Michigan clearly has some things they need to work on, especially with Wisconsin next on the schedule, a team that sports the title of number one best defense in the nation against rushing. If the Wolverines can tighten up their offensive game, particularly their passing situation, then the rumors of Michigan being “back” very well may be true.