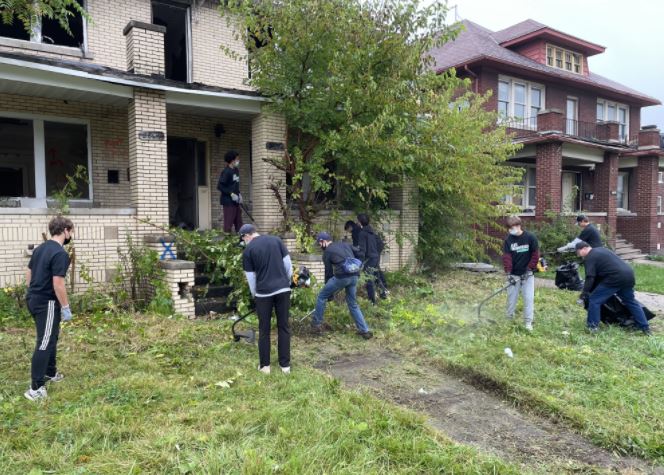 On Tuesday, October 5th, U of D held its annual Pledge Detroit Day. It’s a day of service in which Cubs give back to the community and help raise donations. With around two weeks left to go in the Pledge Detroit fundraiser, students are finding ways to affirm U of D’s commitment to the city of Detroit, while being reminded of their duty to serve those around us.

This year, Pledge Detroit Day was different for the school. Seniors spent the morning working, cleaning up vacant lots in the neighborhoods of Detroit, and assisting the Life Remodeled organization. Life Remodeled helps Detroit communities, giving them new life through service. Cubs were split by homeroom and given different lots to clean, using lawnmowers, garden shears, shovels, etc. Senior homeroom teachers, AVC’s, and other faculty joined the students to help give the homes a makeover. One local even offered to come by and help! As they worked, the Mom’s Club graciously prepared lunch for when the students returned. The rest of the school, on the other hand, spent the day participating in the virtual Walkathon. Cubs were encouraged to walk 10 miles around their community to get active and spread the word about the fundraiser.

As Pledge Detroit reaches its halfway point, it’s more important than ever that students bring in their required $145. Students who do not obtain the required amount will be forced to come in on two different occasions for days of service. If we reach our goal of $145,000 by October 21st, we will receive two days off of school: the Wednesday before Thanksgiving and the Monday after the Super Bowl. However, if you’re one of those students who don’t bring in their money, you’ll be required to participate in service on those days. Less money for Pledge Detroit not only means no days off, but it also means less money for clubs, sports, and extracurriculars. Since I’ve been in the school since 2016, we’ve always reached the goal. Don’t be the reason we don’t reach it this year Cubs!