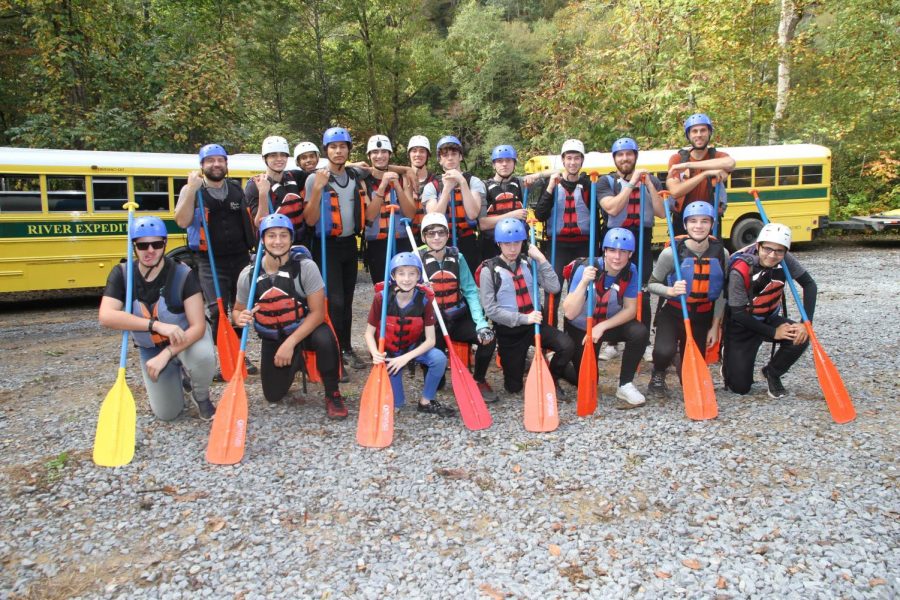 The outdoor club after taking on the rapids of the New River, led by Mr. Coccitti and Mr. Schaefer.

A personal account of this year's white water rafting trip.

Down in the mountains in West Virginia there lies a river. For most of the year, that river is calm and normal. But for six weeks during the summer, in the New River Gorge National Park, the reserve opens up the Gauley Dam, releasing millions of gallons of water down into the river.  This creates one of the best, most dangerous, white water rafting experiences one can find. On the weekend of October 8th – 10th, the U of D Jesuit Outdoor Club took an adventure down to that very river.

There were only 17 available spots on this highly anticipated trip. Mr. Coccitti-Smith, Mr. Edson, and Mr. Schaefer were the leaders who helped guide the group, embracing the camping lifestyle for a weekend and taking a break from our busy, technology-filled lives. The drive to West Virginia was simply beautiful- winding through the Appalachian Mountains to reach the campsite in one of its many valleys. But this sense of peace and serenity was subject to change in the morning. We woke up, had a large breakfast, and made our way to the bus, which would take us to the river to start rafting. There was a palpable air of nervousness on the bus – we didn’t know what to expect from this.

After suiting up and learning the basics of what to do when white water rafting- we were off! The Outdoor Club then spent the next six hours taking part in some of the greatest white water rafting in the world. The trip started off easy, going through smaller rapids to learn the basics. Suddenly, a class 5 rapid (the most dangerous) called The M.A.S.H.S. popped up out of nowhere! This is where it got a little tricky for the club. One of the three boats flipped, so instead of focusing on themselves, the members of the other boats were scrambling to lift the capsized students into theirs. But some weren’t so lucky and had to brave the rapid by themselves, in the water. Luckily, everyone was okay – shaken up, but okay. This early spill made the rest of the group highly focused, and the pace picked up because no one wanted to flip again. We flew down the river, braving two more class 5’s and six more class 4’s. When we got to the end, there was a feeling of relief, but also a sense of sadness – the experience was once-in-a-lifetime, and there was no telling when it would happen again.

Believe it or not, adventure seekers from all over come to the river during what the park calls “Gauley Season,” looking to experience the one-of-a-kind rapids. Even though many students were nervous, and most hadn’t been rafting before, the rush of adrenalin and the awesome experience was totally worth facing our fears.

Overall, this trip was a fabulous experience, and if you’re interested in what else the Outdoor Club has to offer, you can stop by Mr. Coccitti’s classroom, or listen to the Cub Broadcast for when the next meeting will be.