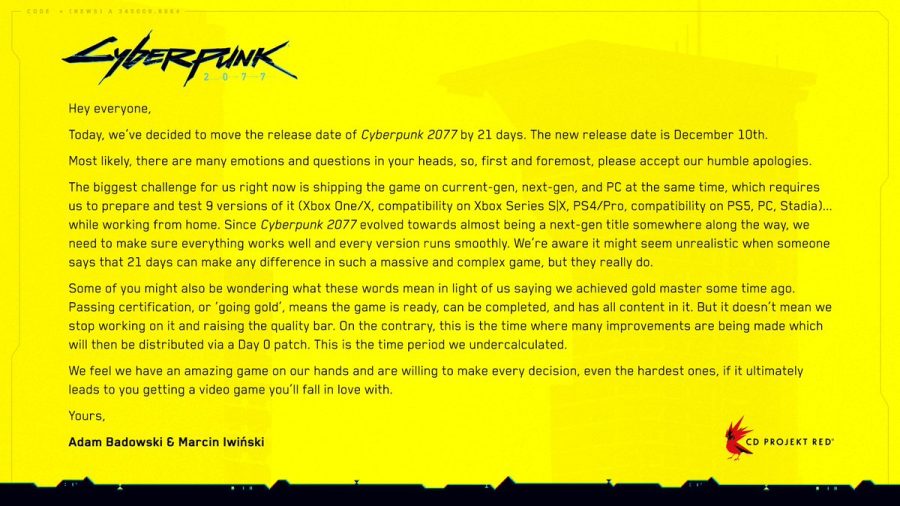 If you’ve ever been excited about a new video game dropping, especially in recent years, you might know the feeling of getting that notification that it just got delayed for months or even longer. However, these delays often happen for a good reason and end up allowing the game to be released in a more finished state. You might have wondered why these sorts of delays happen, and whether or not they can be beneficial. When looking at this topic, it’s important to take crunch, workplace culture, and the effects of COVID into account. Considering all of that, I’m of the opinion that video game delays make sense, and are beneficial for the developers and the final products themselves.

Why do video game delays happen? The short answer is that the development cycle of a video game is complicated and has many moving parts that could fail at any time. Publishers want to get a release date out to the public as soon as possible, in order to generate hype while still giving their developers time to make a quality game. Figuring out what to set as the release date is an advanced process that involves analyzing vast amounts of data, like consumer spending habits, competitors’ game cycles, and the amount of progress made in development. Improper or missing analysis of this data can cause a game to not do well financially. Thus, a delay must occur to ensure the product will be well received.

An example of this process in action is Elden Ring’s delay from January 21st to February 25th of this year. (ER is a new role-playing game developed by FromSoftware Inc.) According to Hidetaka Miyazaki, creative director of Elden Ring, “ The level of freedom that we wanted to ultimately achieve in Elden Ring exceeded what we were initially planning for. This [complexity] gradually built up, and the time needed to debug and QA, in particular, took a lot more effort.” While fans, including myself, were disappointed in this announcement, many of us knew that the game would be better because of the greater amount of time that would be spent on its development. Elden Ring is a perfect example of why a game should be and was rightfully pushed back; it’s unfinished and needs more time in the development stage.

Unfortunately, that’s not always the case, as some games definitely should’ve been delayed for longer, but weren’t. If you’ve been following gaming for even just a little while, you’ve probably heard of the controversy behind CD Projekt RED’s release of Cyberpunk 2077. For anyone who hasn’t heard, Cyberpunk 2077 was one of the most highly anticipated games of all time, being announced in 2013, and finally released in 2020. Many believed that this title would revolutionize the gaming industry and set a new standard for role-playing games. But they were wrong. Just seven days after its initial release, it was removed from the PlayStation store because of its outright unplayability. Bugs and errors plagued every aspect of the game on PS4 and Xbox One consoles. The game was only re-added to the PlayStation store after six months of extensive support from the developer. Fans were outraged and left confused about what happened to make the game fail so hard. More than a year later, it is an acceptable (some might even say great!) game. However, this doesn’t change the fact that its launch was disastrous and permanently damaged the game and the developer’s reputation. This chain of events isn’t special to Cyberpunk either: No Man’s Sky, Anthem, Fallout 76, and GTA: The Trilogy are all recently released games known mainly for their terrible launches.

It’s games like these that show sometimes publishers really do need to step back, analyze the game’s progress, and choose to delay it in order for a quality product to be released to the public. UDJ senior Reid Kozal ’22, says, “Video game delays allow for a developer team to fully realize their vision for a game, rather than settling for a product that both they and the consumer would not be happy with.” I think Reid’s words on the subject perfectly encapsulate my feelings on it as well: nobody likes playing a lousy game, developers don’t like developing one, and publishers don’t like releasing one.

But sometimes publishers really can’t release a game. What effect has COVID had on delayed releases, and more importantly, work-life balance for developers in the gaming industry? Coronavirus has certainly caused hiccups around the world, and videogames are no exception. Halo Infinite, Far Cry 6, and Returnal, all games created by well-respected studios, experienced delays because of COVID. At the beginning of the first major lockdown, in-person work was effectively abolished, leading to a lack of communication and a halt in development. Many gaming fans were disappointed at this – but one of the few upsides to the lockdown, however, was an uptick in employers who allowed workers to perform their jobs remotely. For example: software engineers for hire, such as those whose careers are set in game development, used to be expected to move from place-to-place for work. Since many of these coders jump around from company to company working on different projects, this cycle of moving for every new game can grow exhausting and emotionally unsustainable. The boom of video conferencing apps such as Zoom and Microsoft Teams have allowed these workers to do their job at home instead, granting a better balance between work and personal lives. Although COVID did have disastrous effects on the gaming industry, some good outcomes can be shown too.

All in all, I hope this article has shown you that game delays can be a beneficial process. Not only do they allow for games to be released in a better state than they would have without a delay, but they also allow developers to fully realize their vision for the game and give employees more time. The frustration we all feel when we hear about our most anticipated game being delayed is real, but ultimately, we should all that it’ll work put in the end. (Ahem, Elden Ring, ahem.)